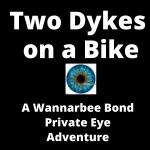 Two Dykes on a Bike is strictly Not Politically Correct. However, it is a tribute to the Gay and Lesbian Festival held every year in Sydney at this time.

Editor’s Note: Wannarbee first emerged in the early 1990s as a writing exercise to honor Mickey Spillane’s birthday. (He was considered the father of Pulp Fiction). Somehow she began to have a life of her own and even appeared (briefly) as a cartoon figure. She went for cover as the new century began, hoping to avoid criticism and trolls. So this is her first very tentative step back into pulp fiction.  She has many other adventures – so please let us know if you want to hear them.