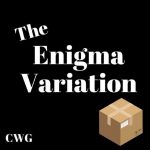 The Enigma Variation. Years ago, the working man would go down to his local male-dominated pub when he wanted a little recreation. White-collar workers began to favour Mens’ Clubs. This story tells of such a club and such a man, but it was not recreation he sought. It was his life. CrimeWithoutGrimeSeries