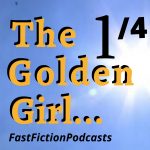 The Golden Girl Part 1 is almost two parts in itself. It begins with a friendship that almost comes to an end on the most crucial of days. But survives, only to falter again, at the worst possible time.

Ten Pound Poms was colloquial for a bi-government initiative between England and Australia – in an attempt to help populate the country. The fares would be paid from the UK to Australia, with a two-year compulsory stay. Otherwise, the fare had to be repaid.